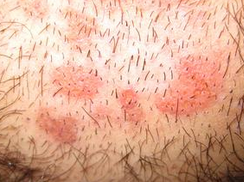 The etiology is still not completely clear, but it is believed that this disease may be related to the increase of sebaceous gland activity, resulting in the increase of sebum released or the change of its related chemical components, resulting in the imbalance of skin surface flora. Secondary microbial infection can occur: such as Pityrosporum ovale and Corynebacterium acnes, which multiply in large quantities and cause skin inflammatory reaction; Increased sebaceous gland secretion, especially fungal infection, also plays a certain role in the occurrence and development of this disease. Genetic factors, changes in endocrine hormone levels, especially increased male hormone levels, neuroendocrine dysfunction, mental factors, gastrointestinal dysfunction, vitamin B deficiency, eating habits, etc. are also related to the occurrence and development of this disease.

Histopathological examination showed focal keratinization of epidermis, occasional neutrophils in epidermis, mild hypertrophy of spinous layer, edema in and between spinous cells, and mild lymphocyte infiltration around dermal vessels. Experiments show that the lymphocyte stimulation response induced by antimicrobial IgG antibody and Pityrosporum ovale extract in patients with seborrheic dermatitis is lower than that in normal people, and these two factors promote the reproduction of these eosinophilic microorganisms and produce inflammatory reaction.