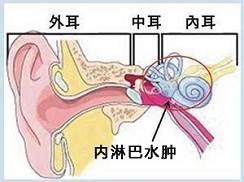 Meniere's syndrome is a sudden onset of non-inflammatory labyrinthine disease with vertigo, deafness, tinnitus and sometimes tightness in the affected ear. Most of them are monaural diseases, the cause of which is unknown, and there is no obvious difference between men and women. Most of the patients are young adults, and the incidence of the elderly over 60 years old is rare. In recent years, there have been cases reported in children, and the course of disease is mostly several days or more than weeks. There are many theories about etiology, There is no final conclusion, such as allergy, endocrine disorder, vitamin deficiency and psychiatric nerve factors, which cause autonomic nerve dysfunction, which leads to vascular nerve dysfunction, capillary permeability increase, resulting in membranous labyrinth hydrops, cochlear duct and balloon expansion, and a series of clinical symptoms such as tinnitus, deafness and dizziness when stimulating cochlear and vestibular receptors. This disease does not pass the treatment, the symptom may alleviate, although may recurs, the attack time interval is uncertain, but also has the attack one time no longer sends the author.