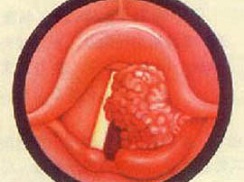 May be related to the following factors:

Tobacco burning can produce tobacco tar, of which benzene pyrene can cause cancer. And tobacco smoke can stop or slow cilia movement, also cause mucosal edema and bleeding, and make epithelial hyperplasia, thickening and squamous metaplasia, which become the basis of carcinogenesis.

Long-term stimulation of mucosa can make it denatured and carcinogenic.

Such as chronic laryngitis or respiratory tract inflammation.

Long-term inhalation of harmful gases such as sulfur dioxide and productive industrial dust such as chromium and arsenic is easy to cause laryngeal cancer.

It is closely related to the occurrence of cancer. It is generally believed that viruses can change the nature of cells and cause abnormal division; Viruses can be attached to genes, spread to the next generation of cells, and become cancerous.

Laryngeal keratosis and laryngeal benign tumors such as laryngeal papilloma can cause canceration after repeated attacks.

Radiation can cause cancer when treating neck tumors.

Some experiments show that the percentage of estrogen receptor positive cells in laryngeal cancer patients is obviously increased.