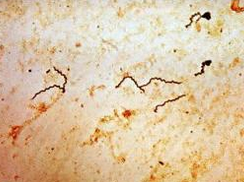 Causes of kidney damage in leptospirosis

Bacteria are slender, varying in length, generally 6-20um, 0.1-0.2um wide, and have a fine and regular spiral. One or both ends of the bacteria are bent in a hook-like shape, often in the shape of "c", "s", etc. Under a dark-field microscope, it can be seen that the Leptospira is like a string of bright microbeads, which are lively and can bend, move back and forth or quickly rotate around the long axis (see Figure 16-2). Under the electron microscope, the Leptospira is a cylindrical structure, the outermost layer is the sheath, which is composed of lipopolysaccharide and protein, the inner is the cell wall, and the inner is the serosa. Between the cell wall and the serosa, there is a twisted two-axle filament. The central axis is located on the side of the bacteria. Leptospira is formed by winding the entire cylindrical cell around the central axis. The cell wall composition of Leptospira is similar to that of Gram-negative bacilli.

Leptospira gram staining is negative, and it is not easy to be colored by basic dyes. The silver plating method is commonly used to stain the bacteria brown, but the spiral cannot be displayed due to the accumulation of silver particles. Leptospira is the only spirochete that can be cultured on artificial culture medium, the optimum humidity is 8～30℃, ph7.2～7.5, commonly used Kosoff (Korthoff) culture medium, grow slowly, and start to reproduce 3～4 days after inoculation , After 1 to 2 weeks, the liquid medium grows in a translucent and defogging turbid state.

Leptospira has stronger resistance to physical and chemical factors than other pathogenic spirochetes. It can survive for several weeks to several months in water or wet soil. This is of great significance to the spread of this bacteria. The resistance of this spirochete to dryness, heat and direct sunlight They are all weak. They can be killed in 10 minutes at 56°C and only 10 seconds at 60°C. They are sensitive to common disinfectants such as 0.5% Lyso, 0.1% carbolic acid, and 1% bleaching powder. They can be killed in 10-30 minutes. Sensitive to antibiotics such as chlortetracycline.

The natural host of Leptospira is mainly murine animals, and it is also the main host of certain groups. Leptospira is excreted in the urine of sick animals and carriers, and invades the carcass through the mucosa or injured epithelial surface. The mucous membranes of the nasal cavity, throat, oral cavity and esophagus, as well as the conjunctiva of the eye, are often the portals of infection.

The nephropathy of leptospirosis is mainly the degeneration and necrosis of renal tubular epithelial cells. The basement membrane of part of the renal tubules is ruptured, and the lumen of the renal tubules is enlarged, and the lumen can be filled with blood cells or transparent casts, which can block the lumen. Renal biopsy of many patients with leptospirosis revealed renal interstitial nephritis, so it can be considered that interstitial glomerulonephritis is the basic pathology of leptospirosis. There was no change in the glomerular endothelial cells under the electron microscope, and it was seen that immune complexes and complement were deposited on the glomerular basement membrane. The renal interstitium presents edema, with infiltration of large monocytes, lymphocytes, and a few eosinophils and neutrophils. Individual cases have small hemorrhage foci. Leptospira can be found in most kidney tissues. Glomerular lesions are generally not serious, and sometimes intracystic hemorrhage and turbidity of epithelial cells can be seen.

In recent years, new ideas have been put forward on the pathogenesis of leptospirosis. It is believed that after Leptospira enters the human body, it is swallowed and dissolved by macrophages, and releases a glycoprotein component, Leptoxin, which inhibits Na-K-ATPase. The role of. The role of this cellular level is closely related to the clinical electrolyte imbalance, arrhythmia and diarrhea of ​​leptospirosis. Furthermore, it is proposed that Na-K-ATPase is the specific target of the toxin, because the Leptospira glycoprotein component has the same affinity and inhibitory effect on each Na-K-ATPase isomer.

Recently, it has also been found that the lipid peroxidation of the cell membrane plays an important role in the occurrence of leptospirosis vascular disease. There is also evidence that certain components of the outer membrane of renal tubular epithelial cells may be directly involved in the induction and maintenance of the immune mechanism of Leptospira interstitial nephritis.