Production of male antisperm antibody Although sperm is an autoantigen, it only appears in puberty and is regarded as an "alien" by the autoimmune system. However, the blood-testis barrier hinders the contact between sperm antigen and the immune system, and will not produce antisperm immune response. If the blood-testis barrier is imperfect or destroyed, such as surgery, trauma, inflammation, etc., sperm overflow or macrophages enter the reproductive tract to devour digested sperm cells, and their sperm antigens activate the immune system and produce antisperm antibodies.

Another possible reason for the production of antisperm antibodies is the decrease in the number or activity of inhibitory T lymphocytes. This cell exists in subcutaneous tissue of epididymis and vas deferens. Under normal circumstances, a small amount of sperm antigen leaked from testicular reticulum and its output tube can activate suppressor T cells, which makes the process of mature B cells recognizing antigen slow, reduces the humoral immune response to sperm antigen and forms immune tolerance. Antisperm antibodies can be produced when the number or activity of suppressor T cells decreases and the factors supplementing suppressor T cells in semen are deficient.

Production of female antisperm antibodies Normal semen contains prostaglandin E and a glycoprotein, which has immunosuppressive effect, and semen precipitin has anti-complement activity. Under normal circumstances, these immunosuppressive factors can inhibit the immune response of female immunocompetent cells to sperm antigen and induce immune tolerance. If the lack of immunosuppressive factors in the husband's semen can lead to the production of antisperm antibodies by the woman. The reproductive tract infection of both husband and wife can cause the production of anti-sperm antibody in the woman, which may be caused by the enhancement of local nonspecific immune response caused by infection. Clinical research

The study of immune infertility showed that the increase of leukocytes in male semen was obviously related to the occurrence of antisperm antibodies in female reproductive tract and serum, suggesting that infectious factors were used as natural adjuvant, and immune-related cells and sperm antigens intervened in female reproductive tract together to produce the same antisperm immunity. Sexual intercourse under the condition of damaged reproductive tract mucosa can make sperm antigen enter T lymphocytes under epithelium through the damaged mucosal epithelial barrier and produce antisperm antibody. Anal or oral sex between the opposite sex is one of the reasons why women produce antisperm antibodies. In addition, some assisted pregnancy techniques, such as direct intraperitoneal artificial insemination, can cause a large number of sperm to enter the abdominal cavity. After being swallowed by macrophages in the abdominal cavity, sperm antigen is transmitted to helper T lymphocytes in pelvic lymph nodes, thus inducing antisperm immune response and causing temporary increase of antisperm antibody in serum.

Sperm and its antigens can be swallowed by macrophages and intraepithelial Langhans cells in vagina and cervix, and their sperm antigens react with helper lymphocytes to induce and activate the production of immunocompetent cells. The latter is transported to the reproductive tract through blood to kill sperm and reduce the survival rate of sperm. On the other hand, sperm antigens include testicular specific lactate dehydrogenase isozyme (LDH-C4), guinea pig sperm serosa membrane specific protein (PH-20), sperm protein-10 (SP-10), human sperm antigen-63 (Ilumanspermantigen.63, HSA-63), rabbit sperm autoantigen (RSA), mannose ligand receptor (1igand-mannosereceptoi ·, L, MR), creatinephosphatekinase (CPK). Fertilityantigen 1 (FA.1) is a specific glycoprotein on the surface of human and mouse sperm. Cleavagesignalantigen-1 (CSA-1), etc., can also enter the body through cervical and vaginal mucosal wounds, and stimulate the immune system to produce antisperm antibodies IgA, IgM and IgG.

It has been reported that the mechanism of infertility caused by antisperm antibody is to inhibit sperm penetrating cervical mucus, kill sperm and reduce sperm survival rate, or inhibit sperm capacitation, acrosome reaction and fertilization. Therefore, it is considered that cervical immunological dysfunction is also one of the important reasons for female infertility.

5. Sexual intercourse is too frequent

Frequent sexual intercourse is also one of the important reasons for inducing the woman's immune infertility. There are many kinds of proteins in sperm and semen. For some women who can produce specific immune response, if they come into contact with their husbands' sperm and semen frequently and repeatedly, these foreign proteins can easily stimulate the production of antisperm antibodies after being absorbed by female reproductive tract as an antigen substance. Now it is thought that there are two main kinds of antibodies: one is called "agglutination antibody" and the other is called "immobilization antibody". When sperm moves to cervix, if it encounters the former, sperm will adhere and accumulate together, bind each other, lose the ability to move, and be absorbed by female reproductive mucosa, thus forming a vicious circle of immune infertility. If sperm encounters the latter, it will hinder the movement of sperm, thus making sperm and egg unable to meet. In addition, "brake antibody" can also weaken the contraction ability of uterus and fallopian tube, and affect sperm to move into uterine cavity. Therefore, even if fertilization and implantation are forced, embryo development is often blocked and early abortion may occur. Couples who are infertile because of frequent sexual intercourse are best to suspend sexual life for a period of time, and then have sex again.Only in this way can we hope to conceive. 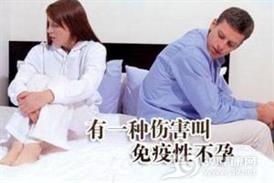