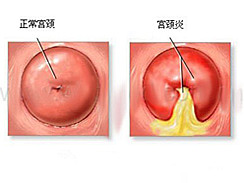 Because acute cervicitis is not treated thoroughly, pathogens are hidden in cervical mucosa to form chronic inflammation, which is more common in childbirth, abortion or operation after cervical injury, and pathogens invade and cause infection. The main pathogens of chronic cervicitis are Staphylococcus, Streptococcus, Escherichia coli and anaerobic bacteria. At present, chronic cervicitis caused by Chlamydia trachomatis and Neisseria gonorrhoeae infection is also increasing. In addition, some viruses such as herpes simplex virus have become common pathogens.

The appearance of the cervical vagina at the external mouth of the cervix is a fine granular red area, which is called cervical erosion. At present, the term cervical erosion has been abandoned in the textbooks of obstetrics and gynecology in western China, and it has been renamed as cervical columnar ectopy, which is not a pathological change, but one of the physiological changes of cervix. Mainly based on the following understanding:

(1) Under the microscope, the erosive surface is covered by a complete single-layer columnar epithelium of cervical canal. Because the columnar epithelium is thin and its lower interstitium is red, it looks like erosion to the naked eye, not the true erosion of epithelial shedding and ulcer.

(2) Under colposcopy, it showed the outward migration of the junction of the original scales and columns.

Due to the long-term stimulation of chronic inflammation, cervical tissue is congested and edema, glands and interstitial hyperplasia, and mucus retention may form cysts in the deep part of glands, which makes cervix hypertrophy to varying degrees, reaching 2 ~ 3 times of normal cervix, with increased hardness, but the surface is smooth, and sometimes cervical gland cysts protrude.

Pathological inflammatory erosion and pseudo-erosion: Only in some physiological conditions, such as adolescent and pregnant women, due to the increase of estrogen level, the columnar epithelium of cervical canal proliferates and moves outward, and it can be seen that the external mouth of cervix is red and fine granular, which is pseudo-erosion of cervix and does not belong to pathological cervical erosion; Others are inflammatory erosion.

According to the depth of cervical erosion, it can be divided into three types:

At the initial stage of inflammation, the erosive surface was only covered by a single columnar epithelium, and the surface was flat.

Subsequently, due to excessive hyperplasia of glandular epithelium accompanied by interstitial hyperplasia, the erosive surface is uneven and granular.

Interstitial hyperplasia is obvious, and surface irregularity is more obvious and papillae-like.

A. Mild: refers to the erosion surface less than 1/3 of the whole cervical area.

B. Moderate: It means that the erosive surface accounts for 1/3 ~ 2/3 of the whole cervical area.

C. Severe: refers to the erosion surface accounting for more than 2/3 of the whole cervical area.

The local protruding lesions formed by the proliferation of cervical mucosa are called cervical polyps, and polyps often have pedicles protruding from the base to the external mouth of cervix. The mechanism of polyp formation is unclear, which may be related to local chronic inflammatory stimulation. Polyps often occur in prolific women aged 40 ~ 60. Polyps are one or more, with a diameter of about 1cm, red in color, tongue-shaped, smooth or lobulated in surface, soft and brittle, easy to bleed, and slender pedicle. The root is mostly attached to the external mouth of cervix, and a few are on the wall of cervical canal. Under light microscope, the center of polyp is connective tissue with congestion, edema and inflammatory cell infiltration, and the surface is covered with a single layer of high columnar epithelium, which is the same as cervical canal epithelium. Cervical polyps are rarely malignant, and the malignant transformation rate is less than 1%. However, it should be noted that uterine malignant tumors can be polypoid and protrude in cervical orifice, and attention should be paid to differentiation.