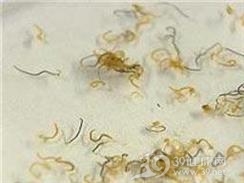 In endemic areas, 90% of schistosomiasis patients have chronic schistosomiasis. At this time, most patients have no obvious symptoms and discomfort, or may be in a subclinical state from time to time, showing diarrhea, mucus, pus and blood in the stool, and hepatosplenomegaly , Anemia and weight loss.

Fever: Generally between 38°C and 40°C, intermittent fever is more common, with a heat duration of 2 weeks to 1 month. It is accompanied by chills and night sweats. The fever of mild patients is relatively low, generally not exceeding 38°C, and the fever will disappear automatically after only a few days.

Colonic peritoneum infection: The patient has abdominal pain and diarrhea. Stool like dysentery with blood and mucus. If a sigmoidoscopy is performed at this time, mucosal hyperemia, edema, and small yellow particles (eg nodules) and a few ulcers can be found. Incomplete intestinal obstruction, a cord-like mass can be palpable in the left lower abdomen. Severely infected patients can cause peritoneal irritation, fullness, flexibility, and tenderness due to the massive deposition of eggs in the colon serosal layer and mesentery, which can be misdiagnosed as tuberculous peritonitis.

Hepatosplenomegaly: The surrounding tissues are congested and edema, causing the liver to swell sharply, its quality is soft, and there is pressure and pain. Both left and right lobes were swollen, with the right lobe more obvious. The spleen is congested and enlarged by the worm egg toxin, which can be obviously palpable. There may be ascites, portal hypertension, liver fibrosis, and varicose veins at the lower end of the esophagus and fundus due to the formation of collateral circulation.

Late-stage patients may be complicated by upper gastrointestinal bleeding, hepatic coma and other serious symptoms and cause death.

Respiratory system manifestations: Coughing is quite common, with symptoms such as chest pain and bloody sputum. The lung signs are not obvious, but the X-ray film shows increased lung patterns, patchy shadows, and miliary changes.

The chronic type is more common in patients with chronic early schistosomiasis. The main symptom is epileptic seizures, and it is more common in localized epilepsy. There are also patients with increased intracranial pressure with localized signs as the main manifestation. When worm eggs cause cerebral artery embolism and other diseases, sudden hemiplegia and aphasia can occur.

In addition to the epidemiological history and current clinical symptoms, the diagnosis mainly depends on laboratory tests. The schistosome eggs found in urine, feces or rectal biopsy specimens are characteristic, and serological examination can be used for general surveys. For long-term unexplained abdominal pain, diarrhea and blood in the stool, hepatosplenomegaly, especially the right lobe of the liver, or epilepsy in the middle age, and eosinophilia, chronic schistosomiasis should be considered. For patients with large spleen, intra-abdominal lump, ascites, upper gastrointestinal bleeding, intestinal obstruction, and dwarf, advanced schistosomiasis should be considered.