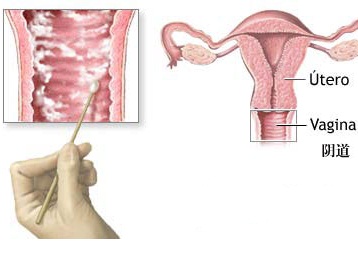 Vaginitis can be divided into many types due to different causes, and different types of vaginitis have different symptoms.

If there are other bacteria mixed infection, the excretion is purulent and may have bad smell. The itching parts are mainly vaginal opening and vulva, with occasional burning, pain and sexual intercourse pain.

If there is infection at urethral orifice, there may be frequent urination, painful urination and sometimes hematuria. During examination, vaginal mucosa congestion can be seen, with scattered bleeding spots in severe cases, and a large amount of leucorrhea in the posterior fornix, which is grayish yellow, yellow-white thin liquid or yellow-green purulent secretion, often foamy.

Mycotic vaginitis is caused by fungal infection. Its incidence rate is second only to trichomonal vaginitis.

Typical leucorrhea is curdled or patchy, vaginal mucosa is highly red and swollen, and white thrush-like plaque is attached and easy to peel off. Under it is the erosive base of damaged mucosa, or shallow ulcer is formed, and ecchymosis may be left in severe cases. However, leucorrhea does not all have the above typical characteristics, from water samples to curd-like leucorrhea can appear, such as some are completely thin and clear serous exudate, which often contains white flakes.

The itching symptoms of mycotic vaginitis during pregnancy are particularly serious, even restless and painful, and symptoms such as frequent urination, pain in urination and pain in sexual intercourse can also be found. In addition, about 10% of women and 30% of pregnant women are mold carriers, but they have no clinical manifestations.

Bacterial vaginosis is a vaginitis mainly caused by vaginal Gartner bacteria, which can be transmitted through sexual relations.

Because alkaline prostatic fluid can cause amine release, it shows that the odor is aggravated during or after sexual intercourse. The vaginal PH value increases during menstruation, so the odor can be aggravated during or after menstruation. Patients have discomfort in vulva, including different degrees of vulvar pruritus, which generally has no obvious timeliness, but the itching is more obvious in rest and nervous state. There are still different degrees of burning sensation after external administration, and some patients have sexual intercourse pain. Very few patients have lower abdominal pain, difficulty in sexual intercourse and abnormal urination. There was no obvious congestion in vaginal mucosal epithelium at the onset of the disease.

Vaginitis that is not caused by Candida albicans, trichomoniasis of vagina or gonorrhea is called nonspecific vaginitis, also called bacterial vaginosis.

Infant vaginitis, which mostly occurs in young girls aged 2-9, is a common disease of female infants.

Stimulation of a large number of secretions causes vulva pain and itching, and children cry, fidgety and even scratch with their hands. The infection spreads further through fingers and scratches. Some may be accompanied by urgent urination and frequent urination. Acute period can cause labia minora adhesion, adhesion above or below left a small hole, urine flow out from the small hole.

Stimulation of secretion, pruritus and burning sensation in vulva. Vaginal mucosa atrophy may be accompanied by sexual intercourse pain. Sometimes there is urinary incontinence. Infection can also invade urethra and produce irritation symptoms of urinary system such as frequent urination, urgent urination and painful urination.

Pinworm vaginitis is an infectious disease caused by pinworm parasitism on human body. Infection in people through indirect contact and direct anal-hand-mouth contact.

Main symptoms:Vaginal secretions increase, purulent leucorrhea, and rotten tissue discharge, with bad smell. Combined with Candida albicans infection, secretions are like cheese made from skim milk powder. There may be itching and vulva burning, and adult women may have difficulty in sexual intercourse.

Primary symptoms:Some patients had normal appearance and no obvious discomfort. Often complains of vaginal discomfort, pain and tenderness, and white or brown-black vaginal secretions. Some patients with severe illness may have systemic symptoms such as poor appetite, low fever and emaciation.

Main symptoms:Leucorrhea is abnormal and increased, with fishy smell or amine odor. Sometimes leucorrhea is gray milky and has high consistency, which is very similar to the symptoms of trichomonal vaginitis. Light only leucorrhea, smelly, vulva damp discomfort. Often accompanied by vaginal burning sensation, sexual intercourse pain and vulvar pruritus.

Main symptoms:Vaginal secretions are serous or mucous, from which large trophozoites can be found. When vaginal mucosa forms ulcer and bleeding, secretion can turn into purulent or bloody. Sometimes brittle ulcers can appear in cervix and vulva, and fuse into large necrosis.

Due to severe connective tissue reaction, some cases may present irregular tumor-like hyperplasia with hard quality, and the ulcer surface is covered with bloody mucus secretion, which is easy to be misdiagnosed as malignant tumor.

More by menstrual period do not pay attention to menstrual hygiene, especially the use of unclean menstrual supplies resulting in vulva contaminated by unclean things.

It is more common among newly married women. Mainly due to not paying attention to sexual organs and sexual hygiene.

Main symptoms:Leucorrhea is increased, itching and pain inside and outside vagina, and mucous membrane is

It is more common in women with vaginal tear or birth injury.

Main symptoms:Leucorrhea is increased, showing yellow pus-like, with fishy smell, vagina is burning and painful, and mucous membrane is red and swollen.

Main symptoms:The skin is flushed, swollen and consciously severeItching may be accompanied by burning sensation of vulva and vagina. A large number of white thick curd-like or bean curd-like leucorrhea. There may be vaginal pain, irritation and difficulty in sexual intercourse.

Main symptoms:One or several small red papules occur on the labia majora and minora, which quickly break and expand into soy-sized or larger ulcers. The base is soft, filthy, with many pus, obvious pain and gradual expansion.

1. Vaginal secretions are gray, sticky, even like batter, uniform, but not purulent secretions, and the amount is uncertain.

2. The amine content in secretion is particularly high, so it smells fishy. During sexual intercourse or after activities, the smell is often aggravated by promoting the release of amine. After adding 10% potassium hydroxide to secretion, the amine smell can also be released.

4. Meridian clue cells can be detected in wet smear of vaginal secretions.

Among the above four criteria, those with more than three criteria can be diagnosed, and the fourth one is emphasized as the necessary diagnostic criteria.

what are the causes of vaginitis and vaginitis