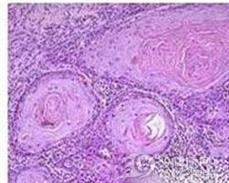 10% ~ 20% of vaginal intraepithelial tumors or early invasive cancers may have no obvious symptoms, or only have increased vaginal secretions, contact bleeding and irregular bleeding or accessible masses, which may show outward growth or ulcer formation and invasive growth. With the development of the course of disease, the vaginal cancer is enlarged and necrotic, and vaginal stench can be discharged and painless vaginal bleeding can occur. When the tumor expands to surrounding organs and tissues, corresponding symptoms may appear. Frequent micturition, urgent micturition, hematuria and dysuria may occur when urethra or bladder is involved; Involving rectum may cause difficulty in defecation or tenesmus; When the vaginal side, main ligament and uterosacral ligament are invaded, lumbosacral pain may occur.

Vaginal squamous cell carcinoma usually occurs in the posterior wall of the upper 1/3 and the anterior wall of the lower 1/3 of the vagina. Vaginal intraepithelial tumors or early invasive cancers may only be erosive. Generally, invasive cancer lesions are mostly exogenous, with papillary or cauliflower types as common, and can also appear in the form of ulcer type, flat submucosal type or vaginal infiltration type. Early vaginal lesions are limited, and late infiltration of whole vagina, paravaginal, main ligament and uterosacral ligament, vaginal fistula of bladder or urethra or rectovaginal fistula, and metastasis of inguinal, pelvic and supraclavicular lymph nodes, even distant metastasis.

For invasive vaginal cancer confirmed by pathology, blood routine, biochemical complete set, chest radiograph, cystoscopy and rectoscopy should be examined. For some patients, barium enema or bone radiation examination should be performed. CT and MRI can judge whether metastasis is possible.