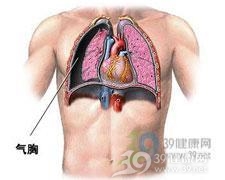 Symptoms of spontaneous pneumothorax in the elderly

The clinical manifestations of spontaneous pneumothorax in the elderly are often atypical and are often concealed by the primary disease. Approximately 1/4 of the cases have a slow onset and gradually aggravated, mainly manifested by the unexplained dyspnea of ​​the original disease; in some cases, the onset of the disease has no clear cause to be found, manifested by sudden or rapid aggravation of chest tightness and shortness of breath; 40% ~60% of cases have sudden and significant shortness of breath, chest tightness, palpitation and dyspnea after severe coughing. A small number of elderly patients can also be induced by physical activities, forced defecation, sneezing, weight bearing and other reasons. Chest pain, especially sudden sharp pain typical of pneumothorax is rare. Other common symptoms include coughing, cyanosis, and inability to lie down. Cough can be irritating dry cough or sputum due to underlying disease. The clinical manifestations of a large number of pneumothorax or tension pneumothorax sometimes resemble pulmonary infarction or myocardial infarction, chest tightness, chest pain, dyspnea, palpitation, profuse sweating, pale complexion, irritability can occur in the early stage; respiratory failure can also be induced on the basis of COPD. Signs of a small amount of pneumothorax are not obvious; when the lung compression is more than 30%, the trachea shifts to the healthy side, the ipsilateral thoracic swells, the respiratory movement is weakened, the percussion shows drum sounds, the heart dullness boundary disappears or the liver dullness boundary shifts down, breath sounds and speech The tremor is weakened or disappeared, which is sometimes easily confused with emphysema. Some elderly patients resemble asthma-like attacks, with severe breathing difficulties and wheezing in the lungs. Most of these patients have severe emphysema, pulmonary insufficiency, and pleural adhesions and multi-room separation. In these patients, shortness of breath and wheezing disappear quickly after pneumothorax drainage.

The clinical manifestations of spontaneous pneumothorax in the elderly are very atypical, which can be easily concealed by the primary disease and misdiagnosed or missed. Elderly patients should consider the possibility of pneumothorax when the following conditions occur: ① Sudden unexplained dyspnea, or sudden increase in shortness of breath on the basis of the original dyspnea, which cannot be explained by the original disease; ② Sudden occurrence of severe chest suffocation Difficulty breathing, except for patients with myocardial infarction and pulmonary infarction; ③Unexplained progressive deterioration of the condition, short-term palpitation, sweating, pale or cyanosis, and/or impaired consciousness; ④Asthmatic symptoms suddenly worsened, both lungs Or one lung is full of wheezing, but various antispasmodics, corticosteroids, oxygen therapy and antibiotics are ineffective; ⑤ rapid or progressive aggravation of cyanosis. The elderly, especially those with COPD and pulmonary tuberculosis, who have the above-mentioned conditions, accompanied by swelling of one side of the chest, weakened breathing, drum sounds on percussion, shifted trachea, weakened or even disappeared pulmonary breath sounds and speech tremor, can be initially diagnosed. If the condition permits, X-ray examination should be performed in time to confirm the diagnosis and understand the degree of lung compression.

introduction to spontaneous pneumothorax in the elderly-symptoms-treatment-care-diet