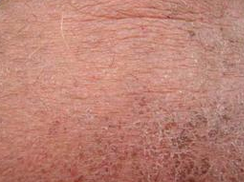 Flushing, substantial diffuse edema, bright surface, papules and blisters of different sizes, clear contents or blood, ecchymosis, erosion, necrosis or ulcer occur on the exposed skin, which are often distributed symmetrically, especially on the head, face and back of hands and feet. Ecchymosis is easy to see in nasal back and zygomatic region. After about two weeks, it gradually subsided. Atrophic scar can be left after ulcer healing. Nails lose luster, are grayish brown, and ecchymosis can be seen under nails. Redness and erosion of lip mucosa occurred in a few patients. Conscious burning, itching and tenderness, especially in fingers and nails. In addition, patients can also have tension, numbness or ant walking. Systemic symptoms are generally not obvious, but sometimes fever, dizziness, headache, general fatigue, loss of appetite, abdominal pain or diarrhea, etc.

According to the patient's history of excessive intake of mud snails and strong sunlight exposure, the rash is polymorphic, with redness and ecchymosis as the obvious ones, which are symmetrically distributed, and tend to occur in exposed parts such as head, face, hands and feet, which are common in women and not difficult to diagnose.