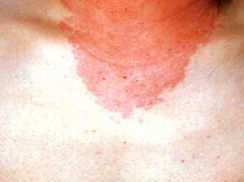 Typical symptoms: scattered or dense inflammatory papules and edematous erythema, some of which are erosive or even shallow ulcers; The skin is red and desquamated, and the patients with long-term illness are dry and cracked

The types and causes of skin lesions are introduced as follows.

1. Eczema-like dermatitis is most common in wire drawing workers, and skin lesions are mainly distributed in the backs of hands, knuckles, wrists and forearms, followed by faces, necks, upper arms, lower limbs and dorsum of feet. It is scattered or dense inflammatory papules and edematous erythema, and some are erosive or even shallow ulcers. The disease is eczema-like or chapped for a long time. The duration of the disease varies. If you stop contacting lubricant, you can recover in about 1 week. The pathogenic cause of this type is the primary stimulation of lubricant, and a few people can have allergic reactions to lubricant on the basis of the disease. Among them, dicyandiamide formaldehyde resin has the greatest relationship with the disease, because it contains about 2% free formaldehyde, which may be the pathogenic factor. Dermatitis in the production of various glass fiber products is related to various synthetic resins as adhesives.

2. Localized dermatitis of finger tip occurred in thread splicing and weaving workers. The skin lesions are limited to the thumb of the right hand, the flexed surface of the indicator finger and The main manifestations are redness and desquamation of skin, dryness and chapping of patients with long illness, and the onset is particularly common every winter. This type is related to the direct stimulation of adhesive.

3. The leading edge peeling of nail bed can be seen in wire drawing workers exposed to lubricant. The lesions were common in the second, third and fourth fingers of the left hand, which were exposed to lubricants most. It is characterized by half-moon separation, erosion and pain of the free edge at the front end of nails. There are local redness and swelling caused by glass fiber penetrating the front edge of nail bed.

4. Sporadic papules are mainly found in wire drawing workers. It is easy to occur on the back of both hands, wrist flexion and palm. Needle to corn size papules, its top can have a black point-like depression, generally no inflammation, tenderness. This type is caused by stabbing skin with thick glass fiber by mechanical action.

6. Burns occasionally occur on the back of hands and flexion side of forearms of wire drawing workers, showing small and shallow ulcers or linear scars. It is mainly caused by hot glass filament chips falling on the leather surface.

7. Facial heat shock erythema is rare. Mainly due to long-term exposure to high temperature radiation in the furnace.