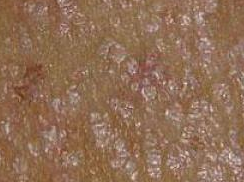 Early symptoms: Only symptoms without rash, which disappeared quickly after bathing. The skin keratinization at the contact site is excessively dry and rough, prone to chapping, touching pain and severe in winter.

Late symptoms: Asbestos into the skin caused by rice grains to soybeans, higher than the skin surface, rough surface, hard, tenderness, fiber can be picked out after healing. Localized keratinoproliferative hard plaque caused by asbestos embedding in skin.

Most of them are engaged in asbestos production, processing and production. Skin lesions are mainly seen in hands, and also in exposed parts such as face and neck. Skin lesions include the following:

(1) Pruritus is more common in exposed parts, with only symptoms but no rash, and disappears quickly after bathing.

(2) Asbestos deposition: Long-term exposure to asbestos dust causes excessive dry and rough skin keratinization at the contact site, which is prone to chapping and touching pain, and is severe in winter.

(1) Asbestos wart: Asbestos penetrates the skin, which is large from rice grains to soybeans, higher than the skin surface, rough and uneven surface, hard and tender, and can be healed after fiber picking out.

(3) Asbestos granuloma (asbestos granuloma): After asbestos is embedded in the skin, it forms an infiltrating mass locally, which is pathologically granulomatous damage. Long-term inhalation of asbestos dust can cause respiratory irritation symptoms and asbestos deposition.

It can be diagnosed according to clinical manifestations.