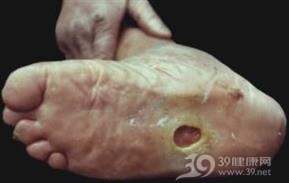 Late symptoms: develop into induration or plaque, ulcer is formed after ulceration, and granulation is formed at the edge of ulcer piercing the base

Clinical manifestations: This disease is rare, and its conscious symptoms are not obvious. It often occurs in children who have not been infected with tuberculosis, and occasionally in adults.

Two weeks after Mycobacterium tuberculosis invaded the broken skin, it first appeared as maroon papules, which occurred in oral mucosa in children, mainly in face and limbs in adults, and then gradually developed into induration or plaque. After ulceration, ulcer is formed, covered with scab skin, ulcer edge is irregular, showing stealth, and granulation is formed at the base. After several months, it can heal itself, leaving dark red scar.

Local lymph nodes are enlarged, which can be broken, cheese is formed, and finally fistula is formed. Slow healing.

Mycobacterium tuberculosis can be easily found in ulcerated skin and lymph nodes. Tuberculin test was negative in the early stage, and changed from negative to positive 3-6 weeks after ulcer occurred.