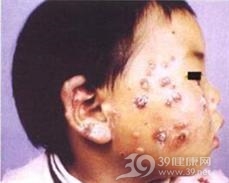 Typical symptoms: non-inflammatory blisters and bullae at the exposed site, erosion, scab, ulcer, scar, miliary papule, pigmentation and hypopigmentation. The brittleness of the skin increases, and a slight abrasion can form an erosive surface. The skin of the affected part can be hung with nails

I. Symptoms and Signs:

Most of them can also appear in adults in infancy (delayed skin hematoporphyria). After illumination, erythema, herpes and even ulceration appear in the exposed part of skin. Scar remains after scabbing, causing deformity and pigmentation. Rash can be eczema, urticaria, summer prurigo or erythema multiforme. Oral mucosa may have red spots, and teeth are brownish red. At the same time, eye damage such as conjunctivitis, keratitis and iritis can be complicated. Some patients have skin allergy, atrophy, melanosis and similar phenomena of scleroderma or dermatomyositis in the later stage of inflammation. Severe cases may have skin scar deformation of nose, ears and fingers. Can have a special purple face. Erythropoietic hematoporphyria and delayed skin type may have hirsutism. In addition to skin symptoms, hepatic hematoporphyria can be accompanied by abdominal or neuropsychiatric symptoms at the same time or in the course of disease evolution, which is a mixed type.

It is characterized by acute abdominal pain with nausea and vomiting.

It is characterized by lower limb pain and abnormal sensation; It can also be spinal cord neuropathy, with paraplegia or quadriplegia; It can also be manifested as brain lesions, resulting in neurological, mental and autonomic symptoms, such as abdominal pain and hypertension.

According to the examination and related signs, a definite diagnosis can be made.

what are the causes of porphyria and porphyria