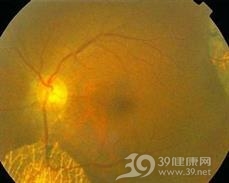 1. Changes in visual function: The disease has a slow course of disease, good central vision, asymptomatic and no night blindness. It is often found by chance during routine eye examination, and there is usually a slight change in visual field. However, when the macula is invaded in the late stage, the vision is seriously damaged, and even blindness may be caused. The changes of visual field include annular dark spots, centripetal contractions and dark spots corresponding to atrophic lesion areas. Dark adaptation decreased in both eyes. EOG is usually abnormal, which can be manifested as the decrease or disappearance of light peak. However, ERG went out completely from normal, suggesting that the photoreceptors of this disease were damaged. In progressive patients, EOG can not record light-induced fast oscillation and slow oscillation, suggesting that the whole RPE is damaged.

2. Fundus changes: The main manifestations are gray-white or cyan-gray retinal choroidal atrophy areas around the optic disc, which extend radially from the optic disc along the retinal vein to the peripheral part. A large number of osteocyte-like pigmentation can be seen in the atrophy areas on both sides of the vein and on the surface of the vein. The optic disc and macular area are generally normal. When the lesion is serious, there may be pigment changes around the optic disc, the retina and choroid near the pigment change area beside the involved vein are atrophied, the arterioles and other retinas are normal, and there is no bleeding and exudation in the fundus.

It is not difficult to diagnose by bilateral symmetrical fundus, slow lesion progression and fluorescein angiography.