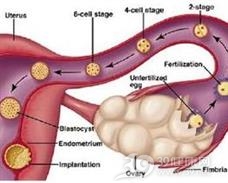 Or rare menstruation, long-term anovulation, excessive androgen and no periodic fluctuation of estrogen.

In normal menstrual cycle or drug-induced ovulation cycle, ovarian follicles developed into dominant follicles, but the follicles did not disappear or maintained growth 48 hours after LH peak in ovulation period, and remained for several days, and granulosa cells had been luteinized without follicles rupturing.

In recent years, the incidence has an upward trend, and clomiphene citrate is the first choice for treatment. For some patients, wedge resection of ovary, ovarian incision, puncture cyst and other therapies can be considered, which also have certain effects.

Ovarian prolapse makes the anatomical position of the umbrella end of fallopian tube and ovary change, so it affects the egg to enter the fallopian tube. Shortening the inherent ligament of ovary can be considered, and the mesangium of ovary can be shortened or fixed on the posterior wall of uterus. Adhesive uterine position abnormality is caused by inflammation and endometriosis, which can cause infertility. Surgical or laparoscopic decomposition of adhesions may be considered.

Ovarian cysts are sometimes related to infertility. Multiple follicular cysts with excessive secretion of estrogen can cause persistent anovulation. Parenchymal tumors of ovary, such as various hormone-secreting tumors, granulosa cell tumors and oocyte cell tumors that secrete female hormones. Manifestation of female masculine symptoms such as secreting male hormone testicular blastoma, adrenocortical tumor, hilar cell tumor are related to infertility [1]. Except for ovarian tumors with malignant tendency, normal ovarian tissue should be preserved as much as possible during tumor resection.

Among the infertility caused by endometriosis, the focus invades ovary most. It can be treated with Danazol (derivative of 17-α-acetylene testosterone); Conservative surgery can be performed. Visible lesions should be removed as much as possible while normal ovarian tissue is preserved. Smaller lesions can also be cauterized under laparoscope. At the same time, mild adhesion in pelvic cavity can be released, or the contents of endometrial cyst can be extracted through the attached needle of endoscopic tube.

Patients with ovarian amenorrhea, after gonadotropin treatment, may have ineffective and effective two types. Therefore, the examination of patients with ovarian amenorrhea should be carried out in sequence: FSH and LH in urine or blood; Gonadotropin stimulation test; LH-RH pituitary stimulation test can be done conditionally; Chromosome and sex chromatin examination; Laparoscopy; If necessary, laparotomy can be performed.