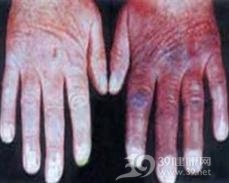 1. Acral scleroderma changes: Raynaud phenomenon of hands is mainly manifested in the early stage, and scleroderma-like changes of forearm and face skin may appear in further development, with thickening and hardening of skin. When the development is incomplete, it may show pale yellow patches or rope-like papular damage, which may be accompanied by different degrees of pigmentation.

2. Bone damage: It can be manifested as shortened knuckles, spherical knuckles and curved nails. X-ray examination shows osteolytic changes, which often start from the absorption and thinning of bone cortex in the early stage, and can cause complete absorption and fracture in the later stage, often involving phalanges, ulna and radius and sacroiliac joints of hands.

In the early stage, it often begins with the thinning of bone cortex absorption, and in the later stage, it can cause complete absorption and fracture. Often involving hand phalanges, ulna and radius and sacroiliac joints; X-ray examination revealed osteolytic changes. Histopathology the skin histopathology mainly showed that the epidermal nails were flat, the collagen fibers in the dermis increased and the elastic fibers were broken. It can be diagnosed.