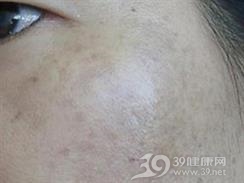 Late symptoms: There are persistent erythema and scales for several weeks, hair follicle papules and blackheads, and then develop into bluish gray to dark brown diffuse or reticular pigmentation.

It is more common in exposed parts such as cheeks, especially around orbit, zygomatic and temporal parts, and the back of hands and forearms. Inflammatory erythema, edema, often burning and itching, followed by persistent erythema and scales for several weeks, hair follicle papules and blackheads, and then developed into bluish gray to dark brown diffuse or reticular pigmentation. If out of contact, the inflammatory reaction can subside within a few weeks, pigmentation can subside in 1 ~ 2 years, and follicular blackheads can last for many years. If exposed for a long time, pigmentation is more obvious, which may be accompanied by telangiectasia, mossy papules, hair follicle mouth enlargement, keratosis and pigmentation around hair follicles, and even obvious precancerous lesions such as hyperkeratosis or epithelioma-like hyperplasia. Patients tend to sweat, which makes the skin lesions show a flash appearance, and the skin lesions can be aggravated after sun exposure. The course of disease is chronic and gradual, often accompanied by dizziness, fatigue, loss of appetite, emaciation and other systemic symptoms.