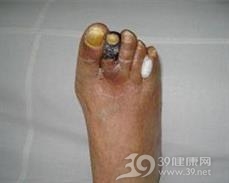 Typical skin lesions occur near the incision suture or drainage tube placement in abdominal surgery (such as ileectomy and colectomy); Fistula outlet after chest wall incision due to abdominal or chest infection (such as empyema); Or chronic ulcer of extremity, infection usually appears 1 ~ 2 weeks after operation, which is a localized erythema and edematous tenderness area at first, and then forms a painful superficial small ulcer, which gradually expands. Typically, the following features can be seen: necrosis (ulcer formation) in the central part, bright red in the periphery and violet in the middle. Skin lesions are almost painful and tender, but patients often have no symptoms of systemic toxicity such as fever. If not treated, the ulcer expands progressively and eventually forms a huge ulcer.

According to the progressive necrotic ulcer produced after surgery or trauma, and through secretion culture, the pathogenic bacteria can be isolated to be diagnosed.