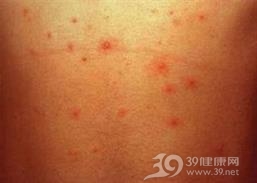 Incubation period lasts for 5 ~ 9 days, which is more common in infants under 3 years old and adults. Sudden poisoning symptoms such as high fever, general malaise, nausea, vomiting and lethargy. The rash occurred the next day. It often starts from the original skin lesion area and affects the surrounding skin, even for the whole body. There are also a few people who are first seen in normal skin. It is characterized by aggravation of swelling of original eczema damage, scattered or dense blisters and pustules on it, umbilical fossa-like depression in the center of blister top and flushing around the base. After 2 ~ 3 days, the lesions can fuse into pieces, but there are still scattered typical rashes nearby. Within 5 ~ 10 days, the rash appeared in batches, and after 8 ~ 14 days, the rash gradually dried and scabbed, leaving pigmentation and superficial scar, and the whole body symptoms disappeared.

The diagnosis can be established according to the sudden occurrence of most umbilical fossa blisters and pustules on the basis of inflammatory skin diseases, contact history of cold sores and systemic symptoms.