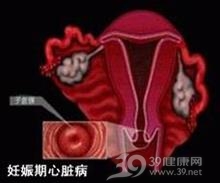 Symptoms of heart disease during pregnancy

① Abandoning blood from lung: It is more common in mitral valve disease, especially after shortness of breath and fatigue, and there are fine wet rales at the base of both lungs. X-ray examination showed interstitial edema.

② Acute pulmonary edema: It is more common in severe mitral stenosis, which is caused by the increase of pulmonary artery pressure due to high blood volume. The patient suddenly suffers from shortness of breath, can't lie down, coughs, cough up foamy sputum or blood, and his lungs are scattered with wheezing or wet rales.

4. Embolism: During pregnancy, blood is in a hypercoagulable state, and heart disease is accompanied by increased venous pressure and stagnation of venous blood, which is easy to be complicated with embolism. Thrombus may come from pelvic cavity, cause pulmonary embolism, increase pulmonary circulation pressure, stimulate pulmonary edema, or reverse left-to-right shunt to right-to-left shunt. If it is congenital heart disease with left and right cardiac cavity communication, thrombus may cause peripheral artery embolism through defect.

5. Pregnancy complicated with heart disease patients can undergo a series of complex changes in the mother's body from the beginning of pregnancy to several weeks after delivery. Cardiac output increased from the 10th to 12th weeks of pregnancy, and reached its peak in the 20th to 24th weeks of pregnancy in supine position, which increased by 30-40% compared with that in non-pregnant women at rest, and returned to normal two weeks after delivery. The heart rate during pregnancy is faster than that of non-pregnant women, and can increase about ten times per minute near term, and even more when pregnant with twins. Blood volume began to increase at the 6th-10th week of pregnancy, and reached its peak at the 32nd-34th week, increasing by 30-50% compared with that before pregnancy. Blood volume generally includes plasma volume and red blood cell volume. Although the red blood cell volume increases continuously during pregnancy and increases by more than 18% at term, the plasma volume increases by about 50%, which is more than that of red blood cells. Therefore, the red blood cell number and hemoglobin concentration are relatively reduced due to dilution, forming "physiological anemia". Due to the growth and development of fetus and the increasing workload of maternal circulation and respiratory system, the oxygen consumption increases continuously and reaches its peak at delivery (20% higher than that at non-pregnancy). During pregnancy, the whole body water content gradually increased and the plasma osmotic pressure decreased. The uterus gradually increases, which compresses the inferior vena cava and makes the inferior vena cava pressure rise; Coupled with gravity, most pregnant women have edema in their calves and ankles. In the third trimester of pregnancy, the uterus is obviously enlarged, resulting in elevation of transverse septum, transverse position of heart, flexion of blood vessels, elevation of right ventricular pressure, etc., all of which increase the burden on the heart.

introduction to heart disease during pregnancy-symptoms-treatment-care-diet