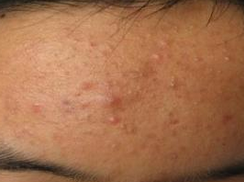 Early symptoms: The symptoms of desert sore are blisters at the beginning, and then a superficial painless ulcer is formed. The ulcer can expand to 2cm in diameter, and the basal surface of the ulcer is attached with white membrane, which is single or multiple, especially in tibia and knee, back of hand and forearm.

Most of the lesions occurred in shins, knees, hands and forearms. The basic lesion was surrounded by blushing blisters, which soon formed scabs. Under the scabs were irregular superficial and suppurative ulcers, with a diameter of 2cm, single or multiple ulcers. Acute period can be painful, systemic symptoms, and local lymph node enlargement, later symptoms disappear, leaving suppurative ulcer with brown scab. After several weeks or months, the ulcer healed, leaving pigmented scar.

Diagnosis can be made according to skin lesions.