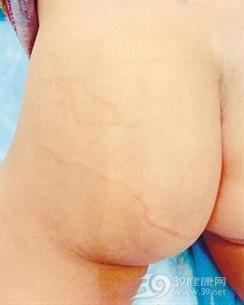 The clinical manifestations are different. It can range from no conscious symptoms to severe symptoms. Incubation period vary in length, ranging from days, weeks to years. With the prolongation of the course of disease, the number of attacks can be reduced, the symptoms can be alleviated, and the attack time can be

Skin damage: Damage is mostly limited to skin, with abdomen, back, limbs, head and face. 1 ~ 2 days after larval invasion, larvae migrate under the skin, and the initial appearance is about the size of broad beans, round non-concave induration or plaque, showing light red to bright red, which is hard to touch, quite like angioedema, filamentous eruption, runner eruption or intermittent trans-dermal migration. Local skin is non-concave edema with pain, itching or erythema. After about 1 ~ 4 weeks, the mass can subside, leaving broad bean-sized induration, and the migration path may have pigmentation and a small amount of scales. Larvae can drill out their skin by themselves.

Eye involvement: Occurrence in eyelid, scrotum and other subcutaneous tissue soft part damage is particularly obvious, and abscess can be secondary during the process. Eye symptoms such as iritis, keratitis and uveitis may occur, and even blindness may occur.

Have a history of eating raw or uncooked fish and contaminated raw water. The clinical manifestations were characterized by runners and cords, which could be confirmed by histopathological and laboratory examination.