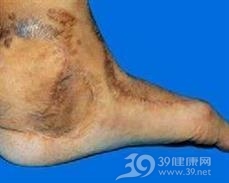 Typical symptoms: Polymorphonuclear leukocytes infiltrate and then form granuloma, which can be manifested as suppurative or suppurative granulomatous lesions. Blastomyces and yeast cells can be seen in lung macrophages, and there are substantial infiltration of pneumonia, lymphangitis and lymphadenitis. Skin dermatitis blastomycosis occurs in exposed areas such as face, hand, wrist, lower limbs or skin mucous membrane junction areas such as mouth, pharynx, tongue, etc., and can also be located in non-exposed parts

1. Primary pulmonary dermatitis blastomycosis inhaled spores into alveoli and were swallowed by macrophages, causing inflammatory reaction including polymorphonuclear leukocyte infiltration, and then forming granuloma, which can be manifested as suppurative or suppurative granulomatous lesions. Blastomyces and yeast cells can be seen in lung macrophages, and there are substantial infiltration of pneumonia, lymphangitis and lymphadenitis.

2. Skin dermatitis blastomycosis occurs in exposed parts such as face, hand, wrist, lower limbs or skin-mucosa junction such as mouth, pharynx, tongue, etc., and can also be located in non-exposed parts. After several weeks to several months, it developed into ulcerative verrucous granuloma with a margin of 1 ~ 3cm high, clear boundary and purple scab. It was often misdiagnosed as basal cell carcinoma, but microabscess often occurred at the margin. Scar formation after ulcer fibrosis. Bacteria can't be found in central biopsy of ulcer, but can only be found at the active edge.

3. Disseminated dermatitis blastomycosis mostly spreads from lung, a few from other parts to bone, brain and other parts through blood circulation, while digestive tract is rarely involved. Spine, ribs, tibia and femur are often involved, showing osteomyelitis, periostitis and even suppurative arthritis, with pain and dysfunction. Brain abscess and meningitis, suppurative granuloma of liver and spleen and prostatitis often occur.

1. Direct microscopic examination of sputum, pus, bone marrow, blood, cerebrospinal fluid, pleural effusion, urine, biopsy or cadaver tissue samples for direct examination. On 10% KOH smear, round, double-walled single spores with a diameter of 8 ~ 18 μ m were found, with thick bud neck and round spores. Spore with single bud can be seen on saline smear, but it should be distinguished from Cryptococcus neoformans, Paracoccidiococcus and Histoplasmosis dubosa.

2. Fungi were cultured on sandcastle agar at room temperature, and began to grow as yeast-like membrane, and then fine spiny hyphae appeared in the center, which gradually increased and formed a central ring. Milky white hyphae cover the whole inclined plane for a long time, and the back surface is light brown. Microscopically, many round or pear-shaped small conidia with a diameter of 4 ~ 5 μ m can be seen, which grow directly from hyphae or conidia stalk. Interspore spore can be seen in old culture. If it is transferred to blood agar and sealed, it can become yeast-like colony at 37 ℃. When biphasic fungi were cultured at 37 ℃, the biggest difference between Cryptococcus neoformans, Coccidiococcus paraspora and Histoplasma dubosa was that yeast cells sprouted and their bud necks were thinner than those of this fungus.