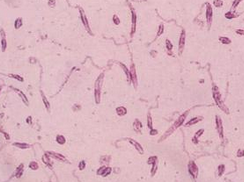 Early symptoms: a red papule at the beginning, and then gradually formed an ulcer with dry scab on the surface

Late symptoms: gradually expanding, with a raised induration area at its edge; Sometimes several ulcers can fuse into huge ulcers. Systemic symptoms such as chills and fever occur when there is secondary bacterial infection

Most of them are young and middle-aged men, and most of them are farmers. Most patients have a definite history of kala-azar. Good invasion of skin and mucous membrane, no systemic symptoms. Skin lesions are mainly erythema, plaque and nodules, and can also be manifested as hypopigmentation spots, light spots or ulcers. Often without any conscious symptoms. Symmetrical distribution is more common in face and part, but other parts can also be involved. In severe cases, facial damage is similar to the lion's face of leprosy. The course of disease is extremely slow.