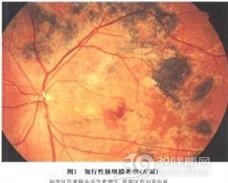 The main conscious symptoms are vision loss and dark shadow in front of us. The degree of visual loss depends on the location and size of the lesion. If the posterior pole or fovea of macula is not involved, the visual damage is mild. Peripheral visual field examination is normal, and absolute or relative central or paracentric dark spots may appear. Visual electrophysiological examination can find abnormal ERG and EOG in a few patients.

1) Acute phase: At the initial stage, the main fundus features are multiple lesions with unclear boundaries, large yellow-white and irregular lesions under the retinal vessels in the posterior pole, showing a map-like shape. It extends to the macula and equator with the optic disc as the center. The lesions can recur repeatedly, and the acute lesions are mixed with retinal choroidal atrophy, with yellow-white edges around the lesions, and invade the deep tissues under normal retinal vessels around the lesions, showing runners. The superficial retina of the lesion is edema, and the retinal blood vessels are filled and dilated. Optic disc edema. Some people have reported inflammatory cells in vitreous body, but some people think that there is no inflammation. There may be hemorrhage under retina in macula and other parts, accompanied by serous retina or pigment epithelium detachment and yellow-white exudate in posterior pole. The lesions recurred again 6 ~ 8 weeks after subsiding or healing, and extended to the periphery on the basis of old lesions. There were atrophic spots of retina and choroid in the center of the lesions, and the marginal lesions were runners, invading the deep tissues under normal retinal vessels.

2) Subacute stage: After 6 ~ 12 months, RPE and retinal edema subsided, and yellow-white exudate under retina was absorbed. The retinal pigment epithelium and choroidal capillaries in the lesion area were destroyed, replaced by gray-brown scar tissue, and depigmentation and deposition occurred in the lesion area and its edge. Scar can be isolated; It can also be fused into a map. In the old lesion, the choroidal vessels were exposed, and the boundary of atrophy area was clear, which had obvious boundary with normal fundus. Neovascularization can occur under retina. Lesions sometimes stop for a period of time, and then move forward.

3) Chronic phase: The lesions stop progressing and atrophy completely, which is RPE and choroidal capillary atrophy, forming subretinal scar, and the large choroidal blood vessels are common among them. The lesions had a clear boundary, and each lesion was the same size during the lesion process, without inflammatory reaction, subretinal neovascularization and RPE detachment.