examination and diagnosis of tinea nigra 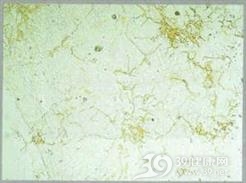 Fungi culture: The materials were inoculated on glucose peptone agar. At room temperature, Mycosporidium tensoni grew rapidly. After 2 ~ 4 days, the colonies were hemispherical, with black villous hyphae on the surface, neat edges and black back. Mycosporidium wernichii grew slowly, and began to grow in 5 ~ 6 days, which was a black and shiny yeast-like colony. In 2 ~ 3 weeks, the colony was bulged in the center, wrinkled, with gray aerial hyphae on the surface, and a circle of yeast-like colony still grew at the edge, which was larger.

Histopathology: Biopsy shows that there are light brown separated hyphae in the stratum corneum of skin, and the hyphae are short, curved or straight, and sometimes there are spores at the end of hyphae.