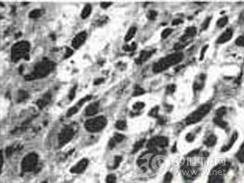 According to the growth and development mode of pigmentoma, general skin melanoma can be divided into three types: superficial spreading type, nodular type and freckle type.

Sharp, the edge is curved, the surface is raised and uneven, and nodules may appear. The appearance is variegated, which is composed of brown, brown, gray, black, pink and white. There is a relatively large radial growth stage before invading the matrix. Once it enters the vertical growth and infiltration stage to the matrix, the clinical disease progresses rapidly. Superficial spreading type accounts for about 70% of cutaneous melanoma, and 1/2 ~ 2/3 vulvar melanoma shows superficial spreading growth.

There are two kinds of black and blue-black, with smooth or uneven surface. This type has only vertical infiltration growth stage, short history and deep stromal infiltration at the time of diagnosis. This type accounts for 10% ~ 15% of skin melanoma and 25% ~ 50% of vulvar melanoma.

The covering area is large and the edges are uneven, and the color is brown with different shades. It is characterized by radial growth and deep infiltration, which is generally late when diagnosed. This type accounts for 0% ~ 10% of vulvar melanoma.

It is common in hairless areas, 65% ~ 70% of which originate from or involve the mucosal surface of vulva, 25% involve only one labia majora, 10% involve clitoris, and about 20% of patients show extensive lesions when they see a doctor. Clinically, local skin or mucous membrane is blue-black, dark-brown or without pigment, the lesion boundary is unclear, the lesion is flat, convex or polypoid, and there may be ulcer, swelling or the formation of skin satellite metastatic nodules. The lesions ranged from several millimeters to more than ten centimeters. 10% of melanomas are non-pigmented melanomas.

Melanoma is composed of epithelial cells, nevus cells and spindle cells, and the melanin degree of these three cells is different. Tissue morphology changes greatly, which can be similar to epithelial or mesenchymal tumors or undifferentiated cancers. The cell size is obviously different, which is round, polygonal, spindle-shaped or polymorphic. Nuclear atypia is obvious, and multinucleated or megakaryocytes can also be seen. There are often obvious nucleoli, and mitotic images are common. Most tumor cells are nested or diffuse, and a few superficial tumor cells only infiltrate in epidermis.

10% of vulvar melanoma is caused by malignant transformation of vulvar nevus. Preexisting nevi is considered as the precursor of melanoma. Rafnarsson-olding reported that 5.5% of vulvar melanoma complicated with preexisting nevi all grew on the hairy skin of labia, 71% were related to superficial spreading growth mode, and 5 superficial melanoma growing on hairy labia skin all complicated with preexisting nevi. Microscopically, benign skin nevus, malignant melanoma and atypical nevus cells coexist adjacent to each other, showing the transition process from benign to malignant melanoma. The authors believe that melanoma in smooth skin of vulva belongs to new melanoma. The superficial melanoma that grows on the hairy part of the labia, like the skin melanoma in other parts, is most likely from the malignant transformation of the vulvar melanoma nevus.