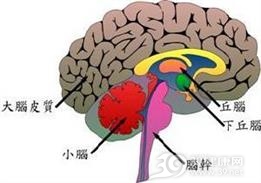 1. Pineal tumors Pineal tumors account for 1 to 2% of intracranial tumors. The prevalence age is 10 to 20 years, and there are more men than women. Clinically, the main manifestations are increased intracranial pressure, symptoms of compression of adjacent tissues and endocrine disorders. The tumor develops from top to bottom and invades the third ventricle or compresses the midbrain aqueduct, blocking the circulation of cerebrospinal fluid and increasing intracranial pressure. The patient has headaches located in the forehead or the temple. Elevated intracranial pressure often presents a progressive increase. When the quadruplex is involved, the patient’s eyeball upward or downward movement in the same direction will be obstructed, and the pupils may be dilated or the size of the pupils on both sides may vary, sometimes the eyelids may be drooping, and some patients may experience hearing loss and tinnitus. And other symptoms. Brainstem and cerebellar arms are invaded, and patients develop pyramidal tract disease and ataxia, usually late. Endocrine disorders only occur in male children, with precocious puberty and abnormal skeletal development. X-ray skull radiographs often show increased pineal calcification, ventriculography shows enlarged lateral and ventricles, filling defects and midbrain aqueducts are all posterior to the third ventricle, and large and large veins are elevated on cerebrovascular angiography.

2. Craniopharyngioma Craniopharyngioma is a tumor of embryonic residual tissue, which usually occurs in the saddle, and is more common in children. The main clinical manifestations are as follows: ①Symptoms of increased intracranial pressure: The patient has headache, nausea and vomiting, decreased vision and diplopia. ②Endocrine disorders: The patient has hyposexual function, manifested as decreased libido, impotence, menopause, etc. In the case of the onset of childhood, the growth and development of the sick child is retarded. Although it reaches adulthood, it looks like a child, and the intellectual development is not affected. In addition, about 32% of patients have polydipsia and polyuria, and even diabetes insipidus, and a small number of patients have abnormal fat distribution and lead to obesity. ③The visual field changes, which is caused by tumor compression of the optic nerve. The patient has visual acuity and visual field defects. Bitemporal hemianopia is more common. The patient's papilledema and optic nerve may show primary atrophy. If the skull plain film finds calcification in the saddle or on the saddle, it is more helpful to the diagnosis of craniopharyngioma. It is not difficult to distinguish it from the third ventricle tumor.

3. Chromophobe pituitary adenomas Chromophobe pituitary adenomas originate from the chromophobe cells of the pituitary, which are more common in adults between 20 and 50 years old. Clinically: ① Pituitary dysfunction: manifested as loss of libido, impotence, reduction of beard and pubic hair, and testicular atrophy in severe cases. In women, the menstrual cycle is prolonged or even menopause occurs. At the same time, the patient's body is gradually obese, lazy and weak, and the basal metabolism is lower than normal. A few patients may have polydipsia and polyuria. ②Visual vision impairment: About 2/3 of patients have vision loss. Most patients start with one eye and then involve the other eye. The vision loss is progressively worsening and eventually leads to blindness. Almost all patients have visual field defects, most of them are double-temporal hemianopia. Secondly, one eye is temporal hemianopia and the other is blind, or one temporal hemianopia is normal and the other eye is normal. Some patients even have blindness in both eyes. ③The optic nerve head of the patients mostly showed primary atrophy. The color of the optic papilla begins to fade, and as time goes by and the optic nerve becomes more and more compressed, it becomes silvery white, and finally becomes pale. At the same time, the vision gradually weakens and even blindness. ④Two-thirds of patients have headaches, mostly located on both temporal sides or on the forehead, often persistent dull pain, without nausea and vomiting. ⑤ X-ray plain radiograph of the skull shows that the sella is spherical or pelvic-shaped, and the brain CT examination can show the shadow of tumor tissue.

4. Patients with brainstem tumors all have mild intracranial pressure increase. Midbrain tumors are especially located in the tegmental area. The symptoms of increased intracranial pressure appear early and more pronounced. Most patients have changes in consciousness and mental disorders. Due to damage to the brainstem network structure, the patient is lethargic, indifferent, and may have hallucinations. Slow progressive cross palsy is a prominent feature of brainstem tumors, and the patient is accompanied by multiple cranial nerve damage. Late examination and spinal fluid examination can find increased intracranial pressure and increased protein content. Pneumocerebral angiography showed enlarged lateral ventricles and third ventricles, especially midbrain tumors. Sometimes a filling defect can be seen in the posterior part of the third ventricle. Cerebral angiography in some patients shows the deformation and displacement of the posterior cerebral artery, superior cerebellar artery, and basilar artery.

5. Most patients with tuberosity sellar meningioma have visual impairment and headache as the first symptoms, accompanied by visual field defects. Most of the visual disturbances start from one eye, and then spread to the other eye. Common hemianopia in both temporal sides or blindness in one eye and temporal hemianopia in the other eye are common. Primary atrophy of the optic nerve is seen, and secondary atrophy is rare. Endocrine disorders are manifested as loss of libido, impotence and amenorrhea. Sometimes patients still experience phantom smell, oculomotor palsy, and half-body sensory disturbances. The skull X-rays generally have no change in the sella, and only a few patients may have a shortened saddle back. Cerebral angiography showed that the root of the anterior cerebral artery shifted upward and backward, and the diameter of the ophthalmic artery was often enlarged and branched to the sella tuberosity to supply the tumor.

6. Intraventricular hematoma mostly occurs in the elderly. It is easy to cause vascular rupture after craniocerebral trauma due to arteriosclerosis, resulting in intraventricular hematoma. All patients have a history of traumatic brain injury. After the injury, the patient was in a deep coma and experienced a sharp increase in intracranial pressure. The patient may quickly develop bilateral pyramidal tract signs, bilateral pupils dilated or constricted, breathing irregularly, and brain rigidity. The patient generally has no signs of localization, but the symptoms of meningeal irritation are obvious, and symptoms of autonomic dysfunction may sometimes appear. Lumbar puncture, cerebrospinal fluid

The pressure increased and was bloody. Cerebral angiography showed enlarged ventricles. CT examination of the brain showed high-density, localized images of the ventricles.