how to diagnose and differentiate scrofulous skin tuberculosis 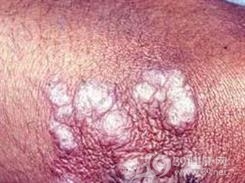 It needs to be differentiated from the following diseases:

1. Syphilis tumors usually occur on the forehead, scalp and calves. They develop rapidly and ulcerate quickly. There is often only one, regular and neat. For example, ulcers have chiseled edges and firm edges. It has nothing to do with lymph. The syphilis serotest is positive, usually adults, and those with a history of medical treatment and venereal disease.

2. Actinomycosis is mainly located in the angle of the mandible, and can even spread to the mandible. There are many fistulas without bundle scars. There are sulfur particles in the pus of the secretion. Actinomycetes can be found under microscopy.

3. The sporotrichosis develops rapidly, the damage is shallow, and it is often distributed along the lymphatic vessels. It can be identified by biopsy, mold culture and treatment tests.

4. Chronic ulcerative pyoderma has an acute onset, often located on the scalp, armpits, groin and calves. Local lymphadenitis is rare. If there is lymphadenitis, the inflammation is more obvious and painful. The ulcer has more pus secretion, and scattered small pustules can be seen around the ulcer.

Clinically, it needs to be differentiated from the following different types of skin tuberculosis:

Lupus vulgaris: It is more common in young people and children. It affects the face, buttocks and limbs, and can also affect the mucous membranes. The basic damage is a nodule the size of a needle to a soybean, leaving atrophic scars after healing. The resultant test is positive.

Mouth tuberculous ulcer: It usually occurs in the natural mouth of the body such as the oral cavity, external genitalia, and anus; the damage is red papules and small nodules; then it develops into a group of small focal ulcers, which merge into large ulcers; round or not Regular shape with creeping edges; the basal granulation tissue is pale, the surface is uneven, and small yellow particles can be seen. The resultant test was negative.

Verrucous skin tuberculosis: most of them are adults, especially in men. It is common in exposed areas, with the back of the hand and the back of the fingers most common, followed by the feet, buttocks, and calves. Soy bean-sized purplish red papules, with wart-like proliferation, scars on the scales and crusts. The resultant test was weakly positive.

Papular necrotizing skin tuberculosis: more common in young people. Skin lesions often occur on the extensible face of the extremities, especially the joints, and can also be seen on the buttocks and trunk. The solid nodules from the needle to the size of the mung bean are blue-red or purple, with necrotic scabs and atrophic scars. The resultant test is strongly positive.

Hard erythema: more common in young women, often accompanied by poor peripheral circulation, such as cyanosis. The skin lesions usually occur on the flexed surface of the lower leg and are symmetrically distributed. Subcutaneous nodules larger or larger in cherries, with hollow scars behind the ulcers. The resultant test is strongly positive.

Nodular tuberculous phlebitis: It usually occurs in the distal extremities of young people. Pea to the little finger-sized intradermal or subcutaneous nodules, no tendency to rupture. The resultant test is positive.

Scrofulous lichenoid skin tuberculosis: habitually on the trunk. Needle-sized miliary papules, flat or pointed, sometimes polygonal like lichen planus, distributed in hair follicles, tend to cluster, and disappear on their own. The resultant test is generally strongly positive.