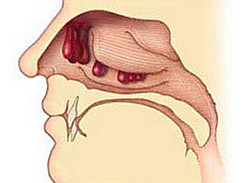 Nasal polyps are mostly bilateral. If polypoid tumors are found on one side, attention should be paid to the following diseases:

1. Polyps of posterior rest foramen of maxillary sinus are more common in teenagers. Anterior nasal endoscopy or nasal fiberendoscopy shows that the gray-white smooth stem pedicle extends backward from the front end of the middle nasal meatus to the posterior nostril. Posterior nasal speculum shows that polyps are located in posterior nostrils, and large ones can protrude into nasopharyngeal cavity or even oropharynx.

2. Hemorrhagic polyps of nasal septum are more common in young people. Most of the tumors occur in the septum, dark red, single and small, easy to bleed when touched, and patients often have a history of epistaxis. It is generally believed that it is caused by residual hematopoietic cells during embryonic process.

3. Inverted papilloma often has a history of epistaxis or bloody nasal discharge. The tumor is red or grayish red, and its surface is not smooth. Small size resembles polyps, but more bleeding occurs when polyps are removed. It is also easy to bleed when touching. The final diagnosis must be pathological examination.

4. The tumor in nasal malignant tumor is dark red, easy to bleed when touched, uneven in surface, obvious in nasal smell and odor, and most of the patients are over middle age.

5. Intranasal meningoencephalocele masses are mostly located at the top of nasal cavity, with smooth surface and pink color. Nasal congestion is not obvious, and the medical history is long and the progress is slow. It is more common in children.

6. Other rare intracranial tumors protrude into nasal cavity, such as chordoma, neuroblastoma and pituitary adenoma.

In addition, if elderly patients have a history of nasal polyp surgery for many times, they should pay attention to the possibility of malignant change, especially those with more bleeding during operation.

X-ray films of patients with nasal polyps mostly show uniform cloud-like turbidity of ethmoid sinus. The mucosa of maxillary sinus is thickened and sometimes small semicircular shadow can be seen, suggesting mucosal polyps in sinus cavity. X-ray film of the above characteristics is proliferative sinusitis performance, such as secondary infection, is shown as the sign of suppurative sinusitis.