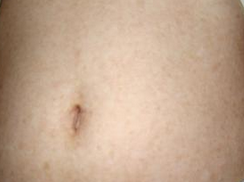 Exclusive diagnosis is needed, and it should be distinguished from the following two diseases first:

1. After scratching or rubbing the skin lesions of pigmented urticaria, the pigmented spots are flushed and form wind masses, that is, Darier sign is positive. Generally, most children suffer from macula, which is small, and may have other damages such as maculopapules, papules or nodules, with a clear realm.

2. Coffee milk spot of neurofibromatosis the pigmentation spot of trunk is different in size and shape, and the boundary is often bright. Most soft hernia tumors protruding the skin surface can be seen. After excluding the above two diseases, further inquire about the medical history in detail: if there is a history of exposure to chemical substances or physical stimulation, a history of long-term use of certain drugs such as arsenic, silver and chlorpromazine, whether there are endocrine disorders and other medical diseases such as Addison's disease, and carry out corresponding laboratory examinations. It is often distinguished from drug-induced pigmentation spots, which have a long history of using certain drugs. Such as silver deposition, often accompanied by mucosal pigmentation, arsenic deposition is often systemic, especially in armpit and perineum, often accompanied by palmoplantar keratosis.